In a Time of Universal Deceit, Telling the Truth is Revolutionary.
Thursday, August 11, 2022

For a decade, war widows in matching yellow suit jackets and hats quietly and persistently have knocked on Capitol Hill doors seeking an end to the “widows’ tax,” a government policy that deprives them of benefits from their husbands’ military service.

They are always warmly received, but that’s where the hospitality ends. Despite pledges of help from scores of federal officials — including President Barack Obama and House Speaker Nancy Pelosi — their long quest remains unfulfilled.

Memorial Medical Center-Lufkin in Texas spokeswoman Yana Ogletree said Wilson started having difficulty breathing while attending a meeting in the eastern Texas town where he lived and was pronounced dead on arrival.

The preliminary cause of death was cardiopulmonary arrest, she said.

Wilson, who represented the 2nd District in east Texas in the U.S. House from 1973 to 1996, was known in Washington as “Good Time Charlie” for his reputation as a hard-drinking womanizer with a staff of beautiful young women known as “Charlie’s Angels.” He called former congresswoman Pat Schroeder “Babycakes,” and tried — and failed — to take a beauty queen with him on a government trip to Afghanistan.

Wilson’s efforts to arm Afghan mujahedeen during Afghanistan’s war against the Soviet Union in the 1980s became a legend in Washington. As a member of the House Appropriations Committee, Wilson secured money for weapons, plunging the U.S. into a risky venture against the world’s other superpower.

The man who killed bipartisanship

Bipartisanship. Sounds like a great concept. At one time, it actually existed in the halls of power in Washington. Bipartisanship helped President Ronald Reagan get

Like the weather that has shut down the Nation’s capital for at least a week, the news for Democrats and President Barack Obama just keeps getting worse.

A new poll shows a restless American electorate continues to lose faith in Obama and his Democratic cohorts while the Republican Party continues its return from the dead and gains ground when it comes to trust.

A new Washington Post–ABC News Poll shows Republicans have significantly narrowed the gap with Democrats when it comes to Americans trust to deal with the country’s problems. 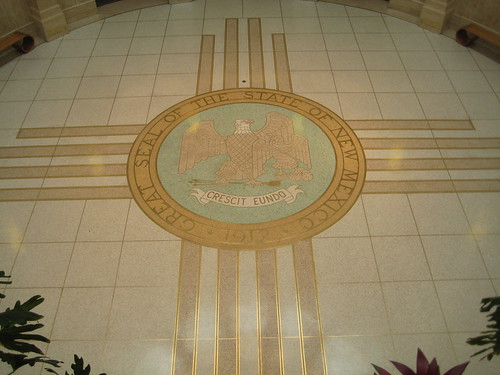 New Mexico’s state legislature is moving quickly to move its money out of big financial institutions and turn it over to credit unions and community banks.

The state’s House of Representatives voted 65-0 this week for a bill that allows the state to move $2 billion – $5 billion of state funds.

The municipal funds bill still must be approved by New Mexico’s Senate but passage appears likely.

Governor Bill Richardson says he supports the legislation and will sign the bill if it reaches his desk.

Comedian-cum-news-commentator Jon Stewart, as expected, had a field day with revelations that Sarah Palin had “crib notes” written on her hand during an interview with Fox News that included questions scripted and pre-approved in advance.

It’s the latest example of dingbat behavior by the Wonder from Wasilla, the former Alaska Governor who quit in mid term, the failed Republican vice presidential candidate who — defying all logic — remains the darling of the right-wing and the Tea Party movement.

What makes the story even more amazing is that Palin — while having to refer to her buzzword crib notes — had the gall to criticize President Barack Obama for using a teleprompter.

When word first circulated around the Internet of a billboard showing a smiling George W. Bush emblazoned with the message “Miss me yet?” some thought it was another viral e-mail hoax.

The billboard along Interstate 35 near Wyoming, Minnesota is real.

So who bought it?

The Nation’s Capital fell to conquerors this week, defeated by a mighty force that overwhelmed the might of a world superpower.

The Washington Post announced on its front page that the National Capital Region “surrendered” to Mother Nature.

Overwhelmed by the weekend blizzard that dumped more than two feet of snow on the center of power and politics in America, nature hit the region with a second strike Tuesday, adding five inches of snow to the mix along with sleet, freezing rain and more misery and woe.

Federal officials announced the government would remain closed for the week. The city’s Metro subway system is operating only underground, leaving suburbs without service because most of their stations — including the one that serves Washington’s National Airport — are above ground.

I am thinking out loud… Can WE [American General Populace] actually be serious?

Could WE actually believe that the Obama Administration was going to rectify ALL that is wrong with OUR Governmental Operations and Economy after YEARS and DECADES of neglect and corruption in 365 days?

Could WE actually believe that in 365 days, the Obama Administration was going to bring EVERYTHING [particularly the BIG TICKET ISSUES] in order, forsaking all of the internal back-biting, backstabbing and downright opposition via the House and Senate?