I will tell you from my own experience of five years in Chicagoland while I was an undergraduate and a grad student at Northwestern, The Chicago Tribune has NEVER endorsed a Democrat (not even Illinois’ own former Governor, Adlai Stevenson, in the 50s)… until TODAY!

Early Voting… I’m back and have given Obama my vote. 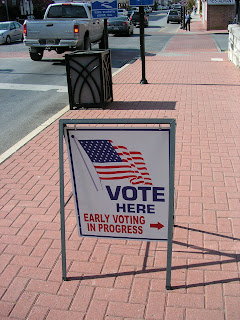 Early voting began in West Virginia on Wednesday, so today is the third day it has been going on.

The Osu Caste System in Igboland

In the Southeast of present day Nigeria lives a tribe. A unique tribe whose language is only spoken within this enclave and nowhere else. This tribe is Igbo. Historians and archeologists have not discovered how or when the Igbos settled here. Even folklore was silent on the origen of the Igbos. In some quatres, there had been a romanticism of a Jewish connection, but this theory exist only in the realm of conjecture. And making matters more difficult was the fact that the Igbos never did advance a centralised system of governance to chronicle their history. Rather they evolved a complex social structure.

I am really getting tired of the Genuises of Propaganda (GOP) Republican party constantly throwing mud at their opponents but when their sordid past comes up they say “that just doesn’t matter”.

McCain Defends His Own Association With Unrepentant Criminal: It’s Ok, He Went To Jail

McCain and his phony plumber

Maybe John McCain should dump the coat and tie and appear at campaign rallies in a pair of low slung work pants that show the crack of his ass. He certainly has proven what an ass he can be to the nation with his tiresome embrace of “Joe the Plumber” in the last Presidential debate.

When it comes to the public’s image of John McCain, it’s as if somebody dialed the electricity down in the past month. For Barack Obama, the juice is still flowing.

People’s regard for the Republican presidential nominee has deteriorated across-the-board since September, an Associated Press-Yahoo! News poll showed Friday, with McCain losing ground in how favorably he’s seen and in a long list of personal qualities voters seek in White House contenders.

In the end, the winner will be the loser

Despite the polls in Obama’s favor, we don’t know for certain whether he or John McCain will win Nov. 4. There are voters who don’t tell pollsters the truth (on race, for one thing). Another October surprise could roil the waters again.

We’re all free to speculate, but we don’t know if we’ll have a close outcome or a lopsided one.

To belabor the boxing metaphor, John McCain may have won Wednesday night’s debate on points but it clearly wasn’t enough to reverse his campaign, now staggering in the late rounds.

All Barack Obama had to do was play rope-a-dope, bob-and-weave and if he took a blow not show it. Obama was cool, cerebral and unflappable, frustrating the more visceral McCain.

Obama is a dangerous solution

So now, in the midst of a financial disaster, presidential polls indicate we will elect Barack Obama, the man who practically cheered this mess on and now promotes ideas that would worsen it.

I know, I know, he’s a saint, and it doesn’t matter that he emerged out of a shady Chicago political machine. Or that his community organizer days accomplished nothing. Or that he hobnobbed with a racist preacher and a now-convicted influence peddler. Or that he evaded tough issues with "present" votes in the Illinois legislature.