The next few hours are critical for the future welfare of countless hundreds of thousands of animals — from dogs to wildlife.

Please join me in the waning hours of the 2010 election season in making the calls and sending the emails to friends, family and acquaintances — and, if you can, to business contacts — in four states where voters will weigh in on policy issues related to animal protection in the 2010 election. Those states are Arizona, California, Missouri and North Dakota.

Below are a sampling of comments I’ve received from energized blog readers. I think you’ll find them inspirational, as I did. I hope you will find time to join them in spreading the word that animals need us this Tuesday. One mighty push now can put a stop to enormous suffering.

First, to recap the important animal issues on state ballots:

Arizona: NO! on Prop 109. This is a special interest power grab to block future wildlife protection ballot initiatives. Very broadly, it is an attack on voting rights, and a thinly veiled effort to hand all state-level wildlife policy over to state lawmakers, who are generally too beholden to the NRA. The trophy hunting enthusiasts at the NRA and Safari Club International are pushing Prop 109, but we’ve heard from many rank-and-file hunters who think it’s dangerous and overreaching. Prop 109 also puts the state’s voter-approved restriction on the use of steel-jawed leghold traps on the chopping block, and that’s not something we can stand for. 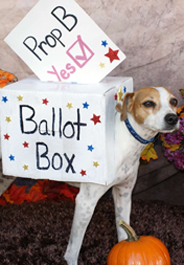 California: YES! on Prop 21. This measure would create a stable and adequate source of funding to maintain state parks and beaches, and promote wildlife conservation and habitat protection.

Missouri: YES! on Prop B. Missouri is the puppy mill capital of America. In these breeding mills, dogs are crammed into small and filthy cages, denied veterinary care, exposed to extremes of heat and cold, and given no exercise or human affection. Prop B will stop puppy mill abuses in Missouri by establishing common sense standards for the proper care of dogs, giving thousands of suffering dogs a better life. The Missouri Farm Bureau has run a deceptive campaign against the measure, saying it would lead to restrictions on animal agriculture. But that’s just a false and fear-based claim. The same people opposing Prop B last got together to work against our Missouri anti-cockfighting ballot initiative 12 years ago, and their claims about a cockfighting ban morphing into a ban on hunting and animal agriculture haven’t materialized in any way. They won’t in the wake of Prop B’s passage, either.

North Dakota: YES! on Measure 2. We agree with many hunters that it is plain wrong to shoot animals confined in pens for the sake of a trophy — often tame animals who have been hand-fed. Measure 2 would outlaw such “canned hunting” operations. North Dakota hunters qualified and led this fight for Measure 2, and we’ve added a voice of support. They’ve been badly outspent, and we’ve worked to level the playing field. We applaud these hunters for standing up for the values of ethics and sporting conduct. The opponents, mainly the North Dakota Farm Bureau, say it’s an issue of property rights. But there’s no absolute right to do whatever you want on private property — whether it’s poaching, canned hunting, or even animal fighting.

If the fear mongers in Arizona ever get away with anything like the pernicious hypocrisy in their Prop 109, America would be in very serious trouble. Nothing else in our history would be a more lethal attack on our constitutional system that protects the freedoms the NRA types boast they are defending. –Arden Allen

I live in Arizona and recently completed my early voting ballot voting against Prop 109. This would be a detriment to the wildlife of Arizona and I only hope this message reaches all voters in Arizona and Prop 109 gets voted down. –Sara

Dear people of Missouri, you must be smart people, as you passed the anti-cockfighting law (for which I applaud you). Now it’s your turn to help the dogs. Their future is in your hands, so please get out and vote yes on Prop B. And to Betty White, I applaud you for standing up for this good law; please keep up the good fight. –Erin

We must stop these puppy mills. It’s just a money making operation at the expense of these poor animals living in these awful conditions. Please, everyone, do what you can to stop this. –Christy A. Mattingly

To so thoroughly and completely deny one shred of dignity or decency to these innocent, sweet-natured, loving animals — sentient creatures who feel, who think, and unfortunately who also suffer horribly — constitutes abuse and cruelty so appalling and sickening, that it makes me want to go personally to each and every single voting adult in Missouri to personally beg them to pass Prop B. But I’m way out here in California so all I can do is to support Prop B in every way I can think of or am asked to, but also to hope and pray to the Good Lord that these precious dogs, who suffer such unspeakable horrors, will be rescued and protected in the future by the passage of this common sense measure. –Victoria Rouse

As a veterinary surgeon for nearly 30 years, I commend my colleagues in Missouri for becoming involved in the opportunity to help alleviate the unconscionable suffering of puppy mill dogs. All too often, my colleagues are quite lax in lending a learned voice for the fight to protect the animal community. –David M. Clark, DVM

I am in Texas but used to live on the Missouri-Illinois line. You guys vote this in and save the dogs. –Bennie Jones

This must stop now. People unite. This is a war on cruelty. Vote yes on Prop B. If you love dogs you must get out and vote. –Denise Edgar

This post originally appeared on Pacelle’s blog, A Humane Nation.