A Visit to St. Elizabeths 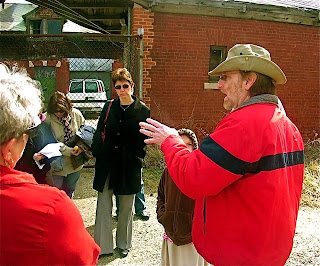 As I said in an earlier post on my blog today, yesterday I went with a group from Full Circle Theater on a tour of both the East and West campuses of St. Elizabeths, washington DC’s historic Mental Institution campus. Dr. Joe Jurand, the Director of POUND at Full Circle in Shepherdstown, WV, led the tour of the East Campus in the morning and we were met by two employees of the General Services Administration (GSA) , Bill and Carter, who led the tour of the West Campus, which is slated to become the home of the Dept. of Homeland Security. Joe participated in this part of the tour as well… he is rather knowledgeable abut the now almost totally gone asylum, since he grew up there, his father being one of the staff psychiatrists.

The story of POUND is set on poet Ezra Pound’s last days at St. E’s. Pound was put there after being declared legally incompetent to stand trial for treason after supporting Mussolini as a radio broadcaster in Italy during the War, making anti-American and anti-semitic pronouncements. He remained at St. E’s for 12 years before being released in 1958.

The West Campus of St. E’s, where Homeland Security will be going it seems, is particularly beautiful, although the building interiors are rotting away. Especially problematical is Hitchcock Hall, which is a Broadway-sized theatre building which seats over 1000 people. Outside it is in pretty good shape. Inside is another story, and it is a shame to see this facility go to waste. Even when restored, if Congress puts up the money and Homeland Security makes it an early and important retrofit, this theatre will not be accessible to the size of audiences it was designed for (at it’s height St. E’s had 7,000 residents and several thousand staff and affiliated doctors.)

The fact that St. Elizabeths is being taken over, on the West Campus, by the Dept. of Homeland Security, is problematical. This Op-Ed by Richard Moe, President of the National Trust For Historic Preservation, appeared in the Washington Post last January:

The Department of Homeland Security needs a new home, and the campus of St. Elizabeths Hospital needs a new mission. Those are the facts. Matching the needs of the DHS and St. E’s, however, is not so simple — and could be disastrous for one of Washington’s most important landmarks and the Southeast neighborhood that adjoins it.

A while back, a panel from the Urban Land Institute studied the site, the community and the market demands in the area. It concluded that a mixed-use, public-private development, possibly involving a federal agency as the anchor tenant, made the most sense. This would bring much-needed revitalization to the campus and community, preserve and reuse important historic buildings, create rehabilitation-based jobs, and draw new residents and business activity to a neighborhood that certainly could use it. Thus, such a match-up would be good for the site and good for the neighborhood.

When my organization, the National Trust for Historic Preservation, included St. Elizabeths on its list of America’s 11 Most Endangered Historic Places in 2002, the primary threat was neglect: Several of the hospital’s historic buildings were boarded up, and many of those still in use were deteriorating fast. Almost seven years later, the situation hasn’t changed much — except that today a new threat looms over the buildings, landscaped grounds and sweeping vistas of this national landmark.

For three years, the General Services Administration has pursued a seriously flawed plan to make St. Elizabeths the site of a massive headquarters complex for the DHS. In addition to having a hefty price tag (GSA estimates the cost at $3.6 billion), this proposal would overwhelm a site of enormous historic and cultural significance by cramming more than 6 million square feet of buildings and parking into a space that cannot reasonably accommodate even half that. Call it death by shoehorn.

What would local residents get in return for the destruction of one of the city’s most important historic places? Not much. In fact, as a Brookings Institution report notes, the GSA plan offers little or no benefit to the neighborhood. Instead of sparking new jobs and spinoff business activity in Ward 8, a part of the city that has suffered from decades of neglect and disinvestment, the DHS complex would be a high-security citadel whose 14,000 employees would have little reason or opportunity to interact with the community outside the gates.

Believing that the Urban Land Institute’s approach represents the best way to put St. E’s to new and productive use, the National Trust for Historic Preservation has urged the GSA to adopt that plan. We have asked that an alternative site for the DHS be found or that only a part of the department — such as the U.S. Coast Guard — be located at St. Elizabeths. We have suggested that some new construction be shifted to the hospital’s East Campus, which is home to fewer historic buildings and landscape features. Though it has made some improvements, the GSA hasn’t moved far from its original proposal: Its plan, which is to be voted on today by the National Capital Planning Commission, places less development on the West Campus and would raze fewer buildings, but even this modification is diminished by the fact that the preserved structures would effectively be walled off from public access.

While the GSA has been working hard to “fast-track” approval of its plan, President-elect Barack Obama has indicated that he may make changes to the structure and operation of the DHS. One of those changes should be a thorough rethinking of St. E’s future. Instead of tacitly agreeing to a deeply flawed plan that would spoil one of Washington’s special places, the Obama administration should explore options to bring new investment, sensitive redevelopment, viable use and vibrant life to the hospital campus while providing maximum benefit to the neighborhood.

The Department of Homeland Security needs and deserves a consolidated headquarters — but this campus isn’t the place for it. The National Park Service calls the GSA plan “wholly incompatible” with the preservation of St. Elizabeths. What’s more, the government’s own projections show that after all the tearing down and building up and paving over are done, the St. E’s campus still would not provide all the office space the DHS needs. In other words, even after taking over St. Elizabeths, the DHS would continue to operate from scattered locations — but in the meantime, a unique urban asset would be wasted, a historic treasure would be turned into a fortress and a once-in-a-lifetime opportunity to spark revitalization in a long-neglected neighborhood would be lost.

In the two months since this was written, the takeover by Homeland Security has become more and more of a sure thing.

No matter what problems the future holds for St. E’s (there is a new, smaller mental hospital which will be called “St. Elizabeths” being built on an East Campus site, which will house about 250 patients… the idea of a resident community-village, which St. E’s was from its founding in the pre-Civil War era to around the 1980s will no longer be in existance), the chance to see what remained of the original structures was pretty exciting. We got into the Central Building and, with flashlights steering us through the dark, boarded up building, we saw where Pound’s tiny bedroom was. The two leads of the cast played out a scene from the play in the hallway outside of Pound’s room lit by flashlights from the rest of the tour (around 18 people). That was a neat experience.

We spent around 5 hours altogether walking and touring… viewing the old Civil War Cemetery, the high ridge that has one of he best views of DC (and from which we were not allowed to take pictures since it would pretty clearly show Bolling Air Force Base) and the location of the early stables, the building dedicated to original founder Dorothea Dix, and the buildings and grounds which provided the scenery for the opening of the film “A Few Good Men.”

If you should get a chance to see some of this, and Bill, from GSA,told me they do a Historical Society tour about once a month, jump at it. This is a piece of American History.