Death and taxes: And you thought you were afraid of sharks

Turn on the news and talk shows and everyone's talking about the economy. It's damn depressing. The good news is that it looks like most of us will be getting tax cuts. You don't hear the bad news which has nothing to do with the economy. Now then, we are all going to die but those of us paying attention realized the other day that there's a remote chance we're all going to die at once.

Turn on the news and talk shows and everyone’s talking about the economy. It’s damn depressing. The good news is that it looks like most of us will be getting tax cuts. You don’t hear the bad news which has nothing to do with the economy. Now then, we are all going to die but those of us paying attention realized the other day that there’s a remote chance we’re all going to die at once. It was recently revealed that early this month a British Royal Navy nuclear submarine, the HMS Vangard, collided with the French nuclear submarine Le Triomphant. America, Russia, China, Britain and France all have nuclear missile subs stealthily cruising the world’s deep seas.

We learned from Time Magazine (Feb. 20, 2009) that the worst that can happen in the unlikely event of a collision is making a large section of the ocean radioactive. We also learned that France refuses to tell NATO members where their subs are, and that the sonar on these monsters of the deep isn’t fool proof. Time describes the the way just one of these submarines could set the sky on fire and vaporize hundreds of millions of people. Considering each sub carries about 50 missiles this is what just one of them will do:

"This is how a submarine-launched ballistic missile works: once airborne, the 60-ton missile travels out of the earth’s atmosphere into sub-orbit, where it moves toward its target at a shade under 4 miles (6 km) a second. Approaching its destination, the tip of the missile splits into multiple, independently targeted warheads, each loaded with bombs up to 24 times more powerful than the Hiroshima blast, which re-enter the atmosphere in a spectacle that from the ground would resemble a meteor shower, before it resembled a thousand roaring suns. " 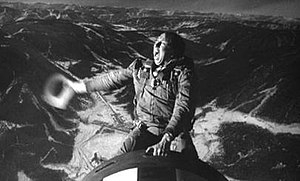 My intention isn’t to minimize the very realistic worries we have about our jobs, mortgages and savings. I also don’t want to feed anyone’s paranoia about a rogue or insane submarine commander and crew channeling Brigadier General Jack D. Ripper and replay the "Dr. Strangelove" scenario with millions of times more megatons. Presumably the submariners in all the world’s navies are among the best, brightest and sanest of the military. (Picture: Slim Pickens as B-52 Bomber pilot Major T. J. "King" Kong riding the bomb that will trigger the "Doomsday Machine" which will end all life on Earth within the year.)

I do believe that this story is being under-reported. Iran and North Korea having nukes is of serious concern. Pakistan, India and Israel have nuclear arsenals.

However, the mainstream media doesn’t pay enough attention to the real nuclear club which doesn’t include nations that have a few nuclear weapons.

It is the big five who have nuclear subs and land based missiles capable of destroying entire countries and starting the war that will end all wars. These countries need to be working together to assure that accidents like the collision, or of the Strangelove variety, don’t happen.

Time Magazine, in the article above, puts it as well as I ever could:

Twenty years after the end of the cold war, humanity still lives within 30 minutes of its own destruction. The price we pay for maintaining nuclear weapons is the gamble that the highly improbable will not lead to the unthinkable. The question to ask after this latest nervy episode: is it worth it?

So meanwhile the next time you’re worried about your 401K or the prospect of being laid off, consider the fact that there are dozens of streamlined, one might say beautiful looking, Armageddon machines roaming the depth of the sea. They are currently doing nothing more than to be of concern to the whales, dolphins and any humans that are of a mind to pay attention.

And you thought you were afraid of sharks.