Updated 10/4/08 - Despite the pronouncement that she wants to expand the role of the vice president, don't look for that to happen if McCain wins. Instead she'll become the Lucy to Ricky Ricardo in the presidential twosome. She'll provide lots of yuks and a bottomless well of inanity for Tina Fey to spoof.
Facebook
Twitter
LinkedIn

Updated 10/4/08 – Despite the pronouncement that she wants to expand the role of the vice president, don’t look for that to happen if McCain wins. Instead she’ll become the Lucy to Ricky Ricardo in the presidential twosome. She’ll provide lots of yuks and a bottomless well of inanity for Tina Fey to spoof.

I’ll say it straight out, Joe Biden won the debate hands down by any measure except the bewitching performance perko-meter. If you counted winks, as someone quoted in a National Review article did, she won six to zero.

Those media pundits who I watched last night and watched this morning seemed to be trying to be balanced. They lamely gave the benefit of the doubt to Sarah Palin.

“She didn’t stumble and she did well” says Democrat Harold Ford on Morning Joe.

Mika Brzezinski says it would have been a disaster if she had stumbled, and she didn’t. By my book, not answering a direct question is worse than a stumble, it’s falling flat.

Republican pundits and spinners are praising her methinks too enthusiastically. Patrick Buchanan, immediately after the debate, was so effusive in his praise I thought he’d been watching the debate after a dinner of psilocybin mushrooms when he bellowed “Sarah Palin was sensational tonight, she regained that magic she had at the convention!” Either he was earning his pay as counter-point to Rachel Maddow or he needs Thorazine to bring him down from his magic ‘shroom trip. Maddow’s comeback to Buchanan was classic: “Boring but right versus exciting and wrong — that’s America’s choice?”

This morning Buchanan calls Palin “my girl”. It’s LSD or a crush on the Wasilla winker.

Even Tom Brokaw seemed a bit smitten if not delusional. He said that at least she didn’t come across as Tina Fey. Is he kidding? The Saturday Night Live writers won’t have to embellish their skit with a single word as Palin gave them ample material.

On the issues, Palin was both over-scripted and insubstantial.

While I found her annoying and likened her presentation to various television characters from Lucy to Chrissy on Three’s Company, I know some voters find her folksy-by-a-factor-of-three style engaging.

I just can’t get beyond disbelieving that anyone in their right mind would wants a vice president whose sentence structures make Bush look like an English teacher representing the United States on the world stage.

The only world leader I can see her sitting down with is Mahmoud Ahmadinejad because in his own way he’s just as cartoonish. She’d bewitch him with her Elizabeth Montgomery – Samantha Stephens magical nose twitch.

Gwen Ifill and Joe Biden let her get away with ignoring questions presenting her cutsy face and giving a repetitious memorized speech to eat up her time.

After the first McCain – Obama debate I said that our Westies slept through it.

My wife kept startling them awake with her shouts of incredulity.

Vice president is one thing, but a doggone winking you betcha president with average intelligence? That is utterly terrifying to contemplate.

On her appeal to Joe Six-Pack

As a psychotherapist, I don’t think it is wise or prudent to glorify Joe Six-Pack image of someone who down the entire six-pack in a few hours. That makes him an alcoholic. Non-alcoholics would be falling down drunk if not unconscious after downing six beers.

Aside from viewing her complementary Joe Six-Pack references from the point of view of a therapist, I agree with Bob Cesca who wrote that she’s “a bonafide hooplehead — so dangerously out of her depth and so delusional — perhaps blinded by ambition — that she is in total denial about the real-world ramifications of her ineptitude. Instead, she’s excusing her embarrassing television interviews and farcical candidacy as an historical breakthrough for “normal Joe Six-pack Americans.”

If you didn’t see the video of Palin attacking Katie Couric, the former high school cheerleader who was often called America’s sweetheart when she presided over The Today Show, take a look-see here.

Is it really wise for Palin to select, of all newscasters to blame for the public’s negative view of her, Katie Couric?

Is it really wise to get into a “mirror mirror on the wall” face off with Katie? 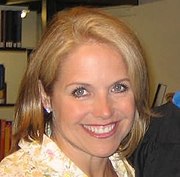 Cropped from the image “Dr. G and Katie Couric” originally posted at Flickr and shared under Creative Commons Attribution ShareAlike 2.0

Palin criticized Couric’s selection of questions yesterday in explaining why she looked uncomfortable. “The Sarah Palin in those interviews was a little bit annoyed,” she told Fox News. “It’s like, man, no matter what you say, you are going to get clobbered. If you choose to answer a question, you are going to get clobbered on the answer. If you choose to try to pivot and go to another subject that you believe that Americans want to hear about, you get clobbered for that, too.” Howard Kurtz, “A debate with two scorecards”

The Next Day OpEds

I haven’t finished reading the major OpEds, but so far I think E. J. Dionne, Jr. in “Hockey Mom on Thin Ice” has an accurate assessment. Winning being defined as “not imploding” is the journalistic version of certifiable insanity.

Here’s another good one from Forbes’ Suzanne Garment . Referring to the cultural divide in our country, which often has nothing to do with intelligence and explains why my inlaws who are very bight former farmers without college educations loved her debate performance. Here’s part of what she writes:

If you were disposed not to like Palin, you would say that Sen. Joe Biden spoke with considerably more sophistication about policy. You would argue that her answers, though improved from past performances, still sounded like talking points. You would say she was manipulative with her down-home stories, her shout-out, her ever-present hockey mom references and her cute little black suit with the big American flag–with rhinestones, yet.

If you were disposed to like Palin, you would note that Biden, while informed, sounded like–well, a politician. You would argue that his answers, though spoken in a language familiar to the East and West coasts, were just as formulaic as hers. You would say that her ability to connect with her audience came not merely from manipulation but from the fact that her words and rhythms of speech really did mirror those of her audience.

The former of Vermont Governor Madeline Kunin of doesn’t add much to the dialogue about Palin but I liked her title “Sarah Palin’s Debate Performance: Fake It ‘Til You Make It”.

Arianna Huffington hits her with both barrels and agrees with me and others that Palin didn’t know what the reference to Achilles’ Hell (oops, Freudian slip) Heel meant.

Please read and adhere to the posting rules of Capitol Hill Blue and the additional rules and guidelines for commenting on this column here.

38 thoughts on “Palin bewitching as vice president, terrifying as president.”