Muhammad Ali mastered the rope-a-dope and beat harder punching sometimes flailing opponents. Obama allowed McCain to hit him with verbal attacks without stinging counter-punches. Perhaps he was hoping McCain would make mistakes to exploit with an effective comeback. He didn't.
Facebook
Twitter
LinkedIn

Muhammad Ali mastered the rope-a-dope and beat harder punching sometimes flailing opponents. Obama allowed McCain to hit him with verbal attacks without stinging counter-punches. Perhaps he was hoping McCain would make mistakes to exploit with an effective comeback. He didn’t.

I’m in the 7% of Obama supporters who thought McCain won the debate easily, probably because I know many view the verbal sparring the way they do boxing matches. I guess I’m like the men Nora Ephron describes watching the debate with who want to see “knockout punches” and notes that “women are at a decided disadvantage in conversations of this sort: we have no interest whatsoever in the resemblance of presidential candidates to people like Rocky Marciano and Archie Moore“, the later light heavyweight champion in the 1950s.

Much of my reaction is comes from finding McCain’s personality and style turpitudinously repugnant, and wanting Obama to leap across the stage and slap the arrogant, obnoxious, condescending, scowling, belligerent braggart silly.

I want Barack to float like a butterfly and sting like a bee, I want him to hit him with a Marciano “Suzie Q” right cross.

What can I say?

I took boxing lessons from a Golden Gloves champion when I was a kid, and, like Joesph Palermo, I’m one of those liberal males who are stuck with boxing imagery and metaphors (see his “Floats Like a Butterfly, Stings Like a Bee” from Feb. 2008 about Hillary vs. Barack.)

I remember watching Rocky Marciano beat his idol, Joe Lewis on television, and saw documentaries showing him winning his first championship against Jersey Joe Walcott knocking him out with his famous “Suzie Q” right cross.

40% of uncommitted voters who watched the debate tonight thought Barack Obama was the winner. 22% thought John McCain won. 38% saw it as a draw.

68% of these voters think Obama would make the right decision
about the economy. 41% think McCain would.

49% of these voters think Obama would make the right decisions about Iraq. 55% think McCain would.

Two focus groups, one by GOP pollster Frank Luntz and another by Democratic pollster Stan Greenberg, both declared Obama the winner. Here’s video of Luntz, some pretty powerful stuff: 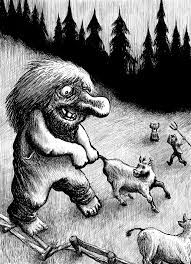 I hope the demeanor of McCain as “troll-like” and “grouchy”, the terms Chris Mathews used, has the negative effect some commentators suggest it will.

McCain is a bully and bullies are like trolls and can be grouchy. Unfortunately too may voters like bullies, and may in fact be bullies themselves. They probably find McCain a kindred spirit. I suspect McCain was the kind of kid who sought out the bookish boy with the pocket protector in the schoolyard and taunted him to impress his thuggish friends.

Image of troll trying to eat a cow is copy-free from Wikimedia.

The minute and a quarter split screen video of the blinky McCain’s smirking grin is already is reportedly being circulated all over the Internet.

Perhaps television pundits will replay it, and the Democrats will use it in an ad because it may turn the non-bullies off.

For the undecided Reagan Democrats for whom a good retort is worth 20 IQ points, I thought Obama was too cerebral. I liked that he was cerebral, but the point of the debate isn’t to prove to me he’s far and away the best choice, the only choice, to be president. It’s to get undecided voters to vote for him.

My wife, Betty, thought it was more a draw. My other bed mates, our ten month old Westies, Mac and Duff slept through the debate, and then when I slept an hour later than their usual wake-up time of 6:00 AM Mac wouldn’t stop licking my face until I got up to let them out and feed them.

(I posted this column a second time so I could add my posting standards as a separate column with the title “Miss Martin’s Classroom Rules of Manners” here. Please review them prior to adding a comment. These guidelines and rules are in addition to those already established for all of Capitol Hill Blue which you should read as well. These are on the bottom of the page.)